This Prairie style house was built for George D. Murray, a prominent Humboldt County attorney and judge, and his wife, Annie Zane Murray, in 1907. The home was designed by architect Warren Skillings and built by contractor D.P. Simpson for $4,000.

George Murray was born in Arcata in 1855, grew to adulthood in Eureka, and attended the University of California and the Hastings School of Law. He opened a law practice in Eureka in 1884, served one term as District Attorney, and was elected Superior Court Judge in 1909. Judge Murray collapsed and died in the Humboldt County courthouse on May 10, 1926, a few minutes after adjourning trial for the day. His obituary contains a lengthy and heartfelt tribute to his outstanding qualities as an individual and as a jurist.

His widow, Annie Murray, continued to own the house at 937 6th Street until 1956, when she sold it to another attorney, Carl L. Christensen Jr. Throughout its 113-year history, the Murray House has been under the ownership of attorneys, initially as a home and currently as an office.

The Murray House is a fine example of the Prairie style, one of the few indigenous American styles, and a rare house style in Eureka. Prairie architecture was developed in and around Chicago and was brought to its zenith by famed architect Frank Lloyd Wright. The Murray House displays a number of Prairie features, including the low-pitched hipped roof with the overhanging eaves, and details which emphasize the horizontal lines of the house. Both the exterior and the interior have been very well maintained and appear much as they did when the house was built for the Murrays in 1907. 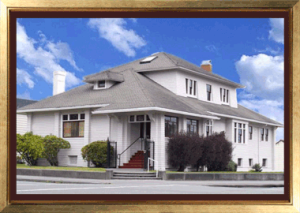